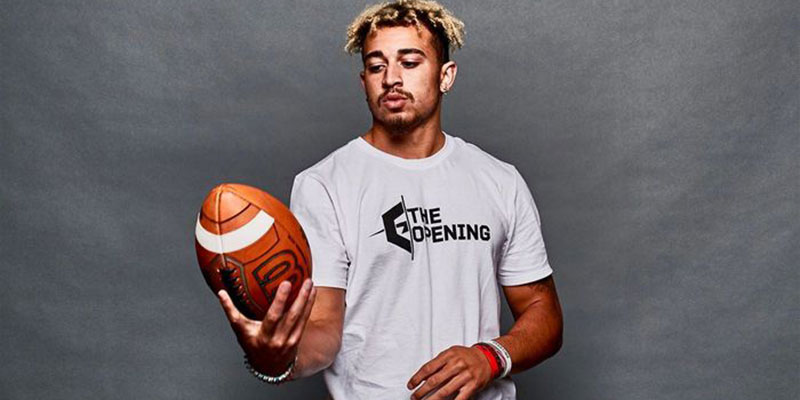 COLUMBUS, Ohio -- Julian Fleming of Southern Columbia (Pa.) High School is the No. 3 player in the country and the No. 1 wide receiver in the 2020 recruiting class.

The five-star recruit is the third-highest rated commit in Ohio State history. According to 247Sports, he projects out to be a future first-round pick, and best compares to former Buckeye and highest-paid NFL receiver of all-time Michael Thomas of the Saints. His scouting report states that he has a “terrific combination of size, strength and leaping ability” and that his “speed and physicality make him elite after the catch” with exceptional ball skills.

He has all of the things you would expect from someone rated as a five-star recruit. Except when you ask him what he thinks will best translate to the college level when he steps on campus in January, none of those things would be the correct answer.

The reaction of “Really, blocking?” is one he’s grown accustomed to.

“Yeah, I knew you were going to say that,” Fleming told cleveland.com.

But his reason for why he feels that way is valid.

“Everybody sees receivers as prima donnas who don’t want to get their hands dirty,” Fleming said. “Our whole wide receiver class as a whole, we have some guys that are ready to come in and put some kids on their butt. Block a little bit, get their hands dirty. I don’t think anyone in our class is a prima donna. I don’t think anyone there’s a prima donna. They have a lot of hard-working guys that do whatever it takes to be successful and for the team aspect to be successful as well.”

Blocking is one of the two things that Southern Columbia High School has him well-prepared for when he gets to the next level. The Tigers run a Wing-T offense, which means that he spends a lot more time “getting his hands dirty” than using them to catch footballs. His targets don’t match that of his status as a recruit.

There’ve been games he’s had eight or nine catches, but there are also games where he only gets targeted one or two times. That’ll be the case when he gets to Columbus, but more because the ball will be spread around to the talent expected to be in receivers coach Brian Hartline’s room in 2020. Fleming is accustomed to that reality already, and he’s learned to take full advantage of his opportunities when they come.

Southern Columbia’s formula for success isn’t one you can argue with. This season the Tigers have scored 706 points while giving up only 26 points. They’re also on pace to win their third straight Class 2A State Championship. It’s hard to be mad about touches when you’re winning and still setting records despite a lack of opportunities to catch the ball.

“I want my last ring,” Fleming said. “A third ring would be the icing on the cake for my senior year.”

Watching the way Ryan Day has revamped the passing game first as a coordinator, then as head coach, has been an eye-opening experience for Fleming.

“Coach Day completely changed the game as soon as he came in,” Fleming said. “He changed the offense up. He’s throwing that thing everywhere while mixing it in with some run. Ohio State has a surprise aspect to them. You don’t know what they’re going to do. It keeps defenses on their toes. Being able to see what they’ve done the past few years just drew me in all the way.”

Fleming says his recruitment is over and it’s been that way since he committed. He says that there is no truth to the rumors that he may decide to flip to Penn State. He wanted to attend Ohio State’s matchup against his home-state school on Saturday, but he’ll be busy playing a state tournament game the same day. Whether he gets five targets or 15 targets in that game, he’ll be satisfied as long as the end result allows him to reach the state semifinals.

Hartline has landed five commitments from wide receivers in his time on Ohio State’s staff. Somehow he landed the best one in the 2020 recruiting class in Fleming, who just so happens to also be the perfect match for what the Buckeyes are looking for.

"It is going to be a talent-filled receiver room," Fleming said. "Everybody in our class has had very successful high school careers. Obviously, that has to translate to the college level because it's a completely different level of football. But from a talent standpoint, we're going to be up there. It's going to be about putting in the work and striving to be successful and win a national championship."